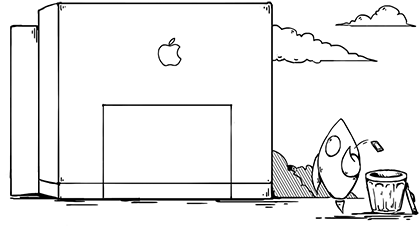 Editor’s Note: Like the rest of you we’re kicking around the office, discussing all of the technology that Apple dropped on us. We’ve shipped apps on every new Apple platform at launch and the Watch has us excited for the next round. I sat down with my fellow owners at MartianCraft: Marcus Zarra, Kyle Richter, and Jeff LaMarche and asked them for their thoughts from the event.

What do you think about the iPhone 6?

Marcus: As with all things Apple, the iPhone 6 will do well. People have been clamoring for a larger screen for a couple of years now. With the Android devices coming out in many different shapes and sizes it is not a huge surprise that Apple has finally done the same thing. I often think I am happy with my iPhone in the original size. But while saying that, I find myself using my iPad more than my iPhone. Why? It is easier for me to read. I expect the iPhone 6+ to outsell the smaller iPhone 6.

Kyle: Consumers have been yearning for a larger iPhone since the first generation. Apple has clearly been listening to the market and has delivered with two size options. The devices will create more developer fragmentation and increase the difficulty of creating really polished apps. However, it will be a net win for the user, and that is really what is important here. I think the iPhone 6 and iPhone 6+ will be the best selling iPhones to date — I know I will certainly have one.

Rob: I’m definitely going big. My iPhone is my daily workhorse and a larger screen will only aid my productivity whenever I pull it out of my pocket. As the proud owner of husky jeans for most of my life, I don’t see the additional size as a problem for carrying it around.

As a developer the additional size class created by the 6+ provides an interesting opportunity. Landscape is now for much more than video on the iPhone and I look forward to a better experience in Mail and Messages. I’m really interested to see what third-party developers can do with it. I also think the iPhone 6+ will quickly become my favorite device for reading. It is closest in size to my Kindle Paperwhite, but unlike my Kindle the iPhone 6+ will always be with me.

Jeff: I always find it hard to judge new Apple products until I can hold them in my hand, but the iPhone 6 and iPhone 6+ look really nice in the pictures I’ve seen. The camera improvements are really attractive to me, and I’m looking forward to a phone that can run video or high-end games without getting hot. I have never been a fan of the larger form factor phones, but the image stabilization in the iPhone 6+ might tempt me to go big anyway. Either way, I need to hold them in my hand before I decide, so I foresee a trip to the Apple Store in my future.

What are your first impressions of Pay?

Marcus: Finally! From a personal perspective I am looking forward to this technology being ubiquitous. I travel a great deal both in the United States as well as abroad and the idea of not needing to go through the various random processes for payment is very appealing.

On a business front I expect this to be significant. Many companies have elected not to develop an application even though they should because they have felt that a web page tailored for mobile was “good enough”. Since I fully expect the Pay API to be app-only, there is going to be a large surge of companies wanting an application now. Imagine being able to order a pizza from your phone (or Watch!) and paying for it without having to pull out your wallet. I expect nearly every retailer that has an online or delivery presence is going to be reconsidering their web page only decisions.

Kyle: Payment has been a dated system since before I ever touched a computer. There have been some really interesting takes at modernizing it over the last decade and while some progress has been made, nothing has really broken through. Pay has the first fighting chance of revamping the way that people exchange money. Apple has done great work in lining up the pieces but it all depends on businesses adopting the technology. Apple needs to play Pay smart and give businesses some great incentives to support new hardware.

Jeff: I’m going to echo Marcus’ “finally”, here. Consumer payment systems in the US are pretty archaic, inconvenient, and are way too susceptible to fraud. A lot of people recognize this and have attempted to come up with solutions, but without a lot of success. I think it’ll take a company with the market- and mind-share that Apple has to make something like this happen. I’m optimistic about the possibility and am looking forward to a day when leaving your wallet at home isn’t a big deal.

Rob: Stripe’s integration with Pay raises some interesting realities for developers. Where is the line between IAP and Pay drawn? Can I sell a Mac app from the iOS companion app? As developer this gives us access to half a billion iTunes customers and makes it super convenient for them to buy our goods. Customers trust Apple and they’re sharing that trust with us. And if Pay is free for merchants, vendors, and developers then it’s icing on the cake.

Marcus: At first I was not excited about it personally. I love a good watch but I have had personal assistant watches in the past and I was not impressed. However, as the presentation went on I started seeing uses for the Watch and got more excited over it. Having had some time to reflect on it, I am excited about it. There are going to be a large number of exciting possibilities for it and I look forward to developing for it.

Kyle: A smart watch is a hard sell, it’s a technology that people aren’t really clamoring for like a better smartphone in 2007 or a great tablet in 2010. I think Apple broke from their traditional pattern of “we know best”. The Watch features dozens of face and band combinations and a highly customizable face. It will really allow for a lot of personalization which is what consumers want from a wearable product. I don’t think there is any company who could of done a better smartwatch and I can’t wait to see it evolve, but we need to keep it mind its a first generation product.

Jeff: I haven’t actually worn a watch since I got my first mobile phone back in the mid-nineties. I never saw a need for a dedicated device to do something that my phone, which I always have with me, does. Because of that, I don’t really have a lot of interest in the Watch for personal use, though the fitness tracking features look really nice and I definitely need to be more active. The price point of the Watch for the fitness audience is going to be a bit of a challenge, but I expect it to sell well despite being considerably more expensive than competing fitness tracking solutions. I also suspect my opinion of the watch may change when I get to actually try one out, especially as third party apps start to come out and expand what the device can do. Even though I’m not really looking for a watch — smart or otherwise — the Watch excites me as a platform.

Rob: The watch on my wrist is currently a mechanical watch that tells the time and requires no power at all to operate. I’m excited for the Watch as an enthusiast for watches, but more so as a UI designer. A new device brings new opportunities, and new contexts where people can use our software. Apple discussed a lot about the intimacy of the interactions since the device physically touches your skin. As a developer and designer for hire I can’t wait to hear about the new ways our customers want to use the Watch.

Yes, this is the beginning, but I believe we’ve seen the future. Many of us will throw barbs at details and places where the watch isn’t perfect, but Apple will keep on iterating. If history holds, we’re seeing the clunkiest Watch and they will only improve the design. If I can draw one negative from the release it’s that it requires an iPhone. There are so many places I’d want to use the Watch instead of my phone. Requiring an iPhone to be nearby will be the most limiting factor for using the Watch.

Will you wear an Watch?

Marcus: For me personally there are going to be some interesting questions about the watch. While I am at a conference I can definitely seeing wearing one as I am constantly connecting with people. Outside of conferences? Depending on the durability. My form of exercise involves motorcycles, high speeds and long distances. It will be interesting to see if the Watch can survive :)

Kyle: The Watch brings a lot of technology that I have long wanted on my wrist but it doesn’t feel like it replaces the traditional watch that I have been wearing most of my life. Apple has been fairly tight-lipped on water resistance and battery life. One of my favorite watches is a Citizen Eco-Drive, it is solar powered allows me to never worry about charging or replacing a battery. Having to charge a watch daily and needing to take it off before I shower, swim, or go into the rain will make it a hard sell. I am very excited about the notion of replacing my Fitbit with something more extensionable so I will likely be seen with one on at launch, though I am eagerly awaiting more specifications before I can say i’m completely sold on it.

Jeff: Probably not. I stopped wearing a watch years ago because my phone and computer had the time on them and didn’t need to be changed any time I flew to a new time zone. For years, I have spent a lot of my day typing, an activity that a watch — especially a bulky watch — can interfere with. I will get one for doing development, though, and it’s possible the thing will win me over eventually.

Rob: Like Kyle, my favorite watch is the one I’m wearing. It’s a mechanical watch that requires no battery or power at all. It literally runs off the motion I make while wearing it. Additionally, it is clad in stainless steel and sapphire crystal making it impervious to water and nearly indestructible. It can also be dressed up in a nice metal band and worn at formal events and business meetings. I don’t know if the Watch will hold up to the daily wear I put on my other wristwatches, nor can I see wearing it to the symphony with my wife. But I want to find out and I’ll be waiting in line with the other crazies sometime in early 2015.