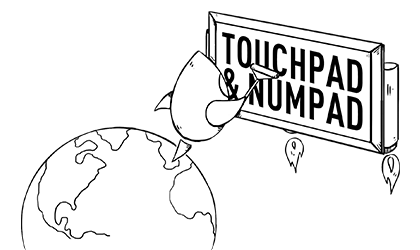 Today we release an all new version of TouchPad and NumPad. For both, this update represents a major overhaul of the code base, design changes, and new features. It also represents a significant change to the business model of both apps.

Let’s talk about the new goodies. The three big features for both apps are:

Of course, there are many other small things you might find. Like incremental jump forward and backwards controls for Plex. More intuitive layouts for the button configurations in TouchPad. And more neat stuff we packed in there for you to find.

Money is what we all want from our apps: for them to at least cover the cost of development. (Which is a lot harder than most people think.) With TouchPad and NumPad we are talking about pair of apps with a large installed base, and this being a costly update for us.

We want to make money, but as we know, Apple does not allow upgrade pricing. Leaving our options at:

We had no interest in doing a free update, we would rather leave things as they are. Shipping a new version of the app is interesting, and the most common thing out there, but it has some fatal flaws:

So we needed to come up with something new. Striking the balance of rewarding current customers, not making them have to download a new app, and still properly charge new customers. (And certainly not having to degrade the name with numbers.)

That’s when we realized a powerful new(ish) tool that Apple gives us: receipt checking. With that we would be able to tell whether someone is an old, or new, customer.

In doing this, we have checked all the boxes we wanted to — by not hampering the app functionality, but still giving current users a reason to pay us a small upgrade fee and thus continuing to support the app and its development.

With NumPad we did something similar:

Our hope is that by making the app free, people get exposed to what is a fantastic tool. But by charging for the more advanced music composition features, we still are able to make money.

Nothing we are doing here is pushing the boundaries of technology, rather we are hoping to find another avenue for profitable, but respectful, upgrades in a system which doesn’t outwardly allow for them.

TouchPad 6.0 and NumPad 5.0 are available today on the App Store and we would love for you to check them out.

Tips for being a better developer