Storyboards are a very useful tool for developing user interfaces in iOS, macOS, tvOS, and watchOS. In addition to providing a way to visually lay out an interface with Auto Layout, they provide a way to build and see navigation and relationships between view controllers. When used well they can greatly simplify and reduce the amount of code developers need to interact with in a project. So why don’t all developers use storyboards?

One of the most commonly mentioned reasons for not using storyboards is teams with more than one developer working on a storyboard at the same time. Merge conflicts are a common occurrence in that case, and can be enough to discourage teams from using storyboards. Since storyboards are machine-generated XML, merge conflicts can be difficult to diagnose and resolve. However, in many cases they don’t have to be.

There are five general situations where merge conflicts are often encountered in storyboards. This post will take a look at each of these in detail to describe how the merge conflicts happen, how to avoid them, and how to resolve them.

Why is there a merge conflict? In this case, Xcode has updated the “document” tag and the “plugIn” tag in the storyboard’s source, as shown in Figure 1:

This merge conflict is the simplest to solve: it only matters which version is used if the changes used a new feature only supported in the new version, so the best solution is just to select the newer version to resolve the conflict and merge. If no real changes have happened, developers should revert the changes to the storyboard and not include it in a commit.

One thing to watch out for: the initial view controller for the storyboard is specified in the “document” tag as well – be sure to check that it didn’t change before resolving the merge conflict.

To avoid this type of merge conflict, it’s advisable for teams to coordinate Xcode updates.

Interface Builder will automatically update a storyboard seemingly every time a developer opens it; frequently the updates are caused by opening a storyboard on a different machine with a different monitor size or type (retina versus non-retina, for example). This type of change, if committed, can cause merge conflicts (see Figure 2). 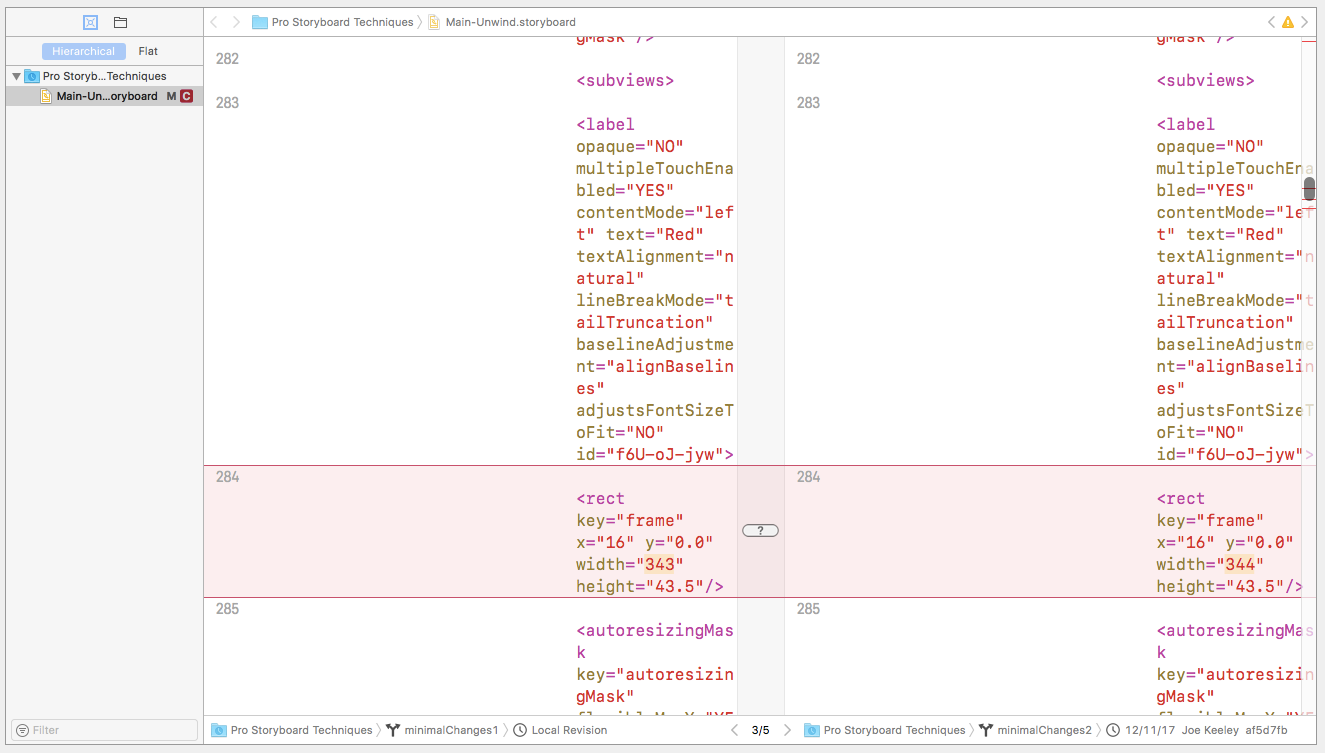 The merge conflicts are pretty easily identifiable as small changes in the frame or layout information for views throughout the document. To avoid this type of conflict, don’t commit automatic changes reflexively. Developers should evaluate if they actually made a change to a storyboard, and only include it in the commit if they did. If a merge conflict of this type is encountered, the simplest approach is to review the conflicts, and if they are minor layout adjustments, select the newest change to resolve the conflict. If the change also shows a change in constraints nearby (you can be certain that is the case by checking whether the “id” of the object with an updated rect is referenced in the updated constraint), it’s likely the the layout change was due to updated constraints and should be selected when resolving the merge conflict.

This type of conflict occurs when two developers use images that haven’t been used before in the storyboard. The images can be used in buttons, image views, or any other view that can display an image. References to the images get added to the Resources section in the storyboard’s XML and can cause a merge conflict, regardless of where the images are used in the storyboard (see Figure 3). 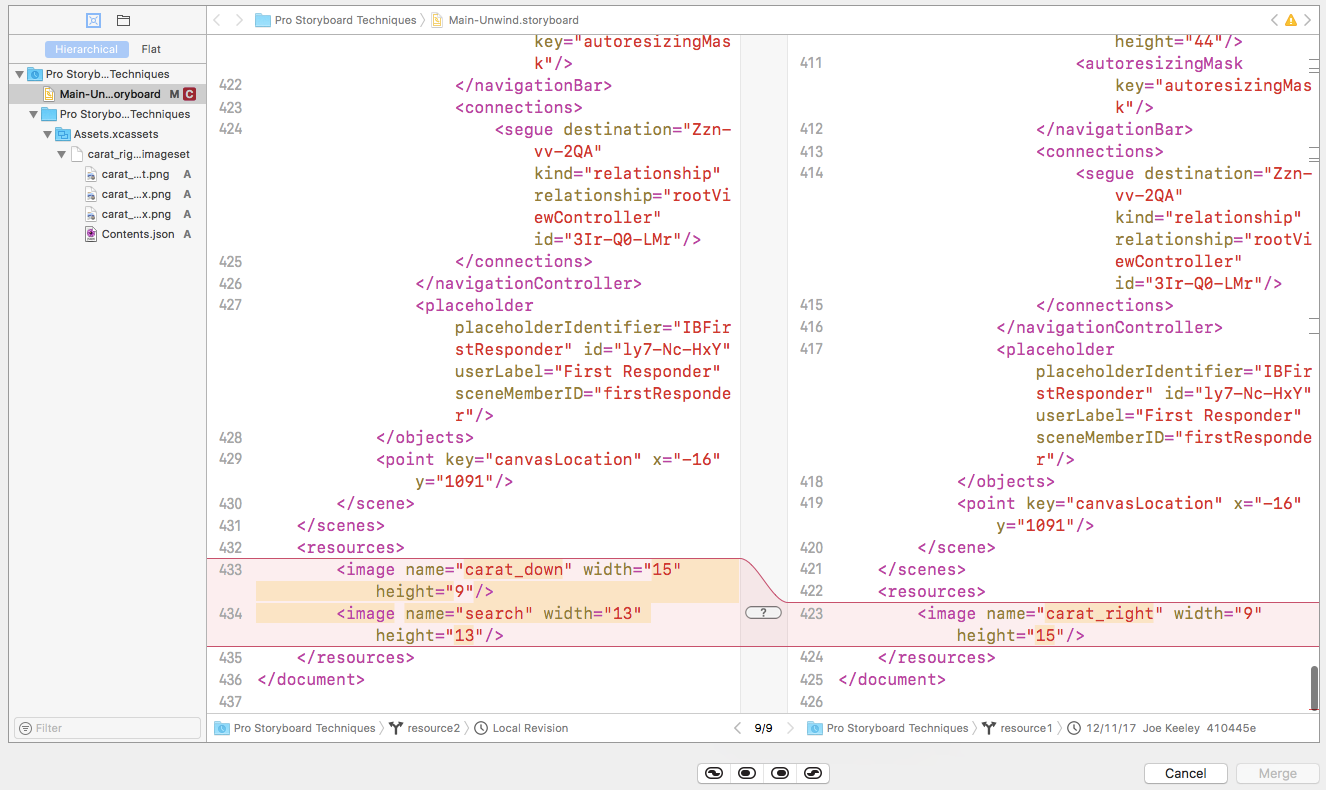 Fortunately a merge conflict in the Resources section is trivial to resolve – it’s very similar to a merge conflict when adding new files to an Xcode project file. Select one of the “both sides” options to merge the changes; the order does not matter.

This conflict can occur when two developers each add a new scene to a storyboard and the storyboard adds the new scenes to the same place in the XML. To resolve the conflict, examine it to be sure that the conflict is at the scene level as shown in Figure 4. 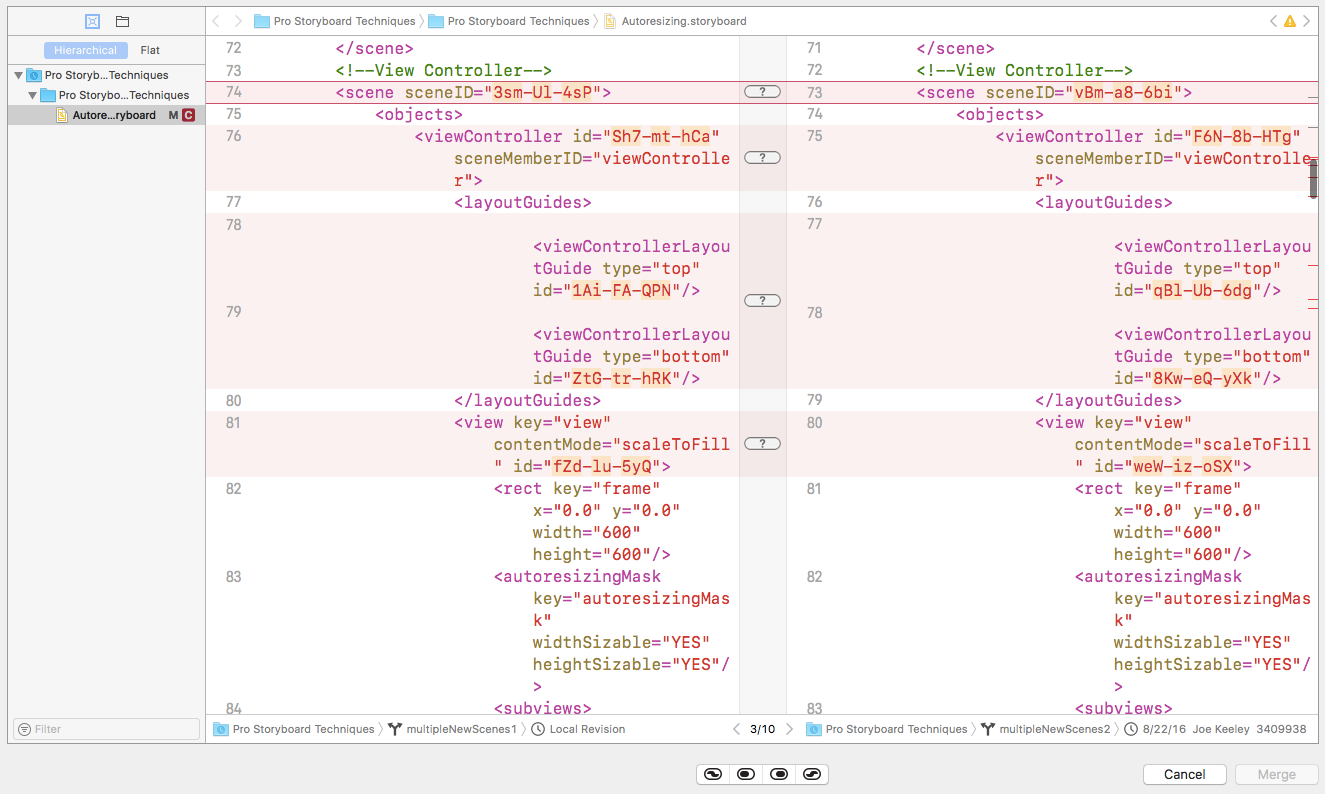 There are two approaches to resolve the conflict, depending on how the diff ends up. If the diff includes the entire scene on each side, then select one of the “both side” options to merge the changes; the order does not matter. If the scenes were somewhat similar, it is likely that the diff will look like the example in Figure 4, where some parts of the scene appear to be unchanged and other parts are conflicted. In this case, use a text editor to move the scene from one side below the scene from the other side, then remove all the conflict tags. Be consistent when removing the conflict tags for each scene – if the scene was on the right, remove only the left side of the conflict for that scene.

After merging but before committing the resolved conflict, be sure to open the storyboard to confirm the changes are correct and did not break the XML structure. Next, update the layout of the new scenes as they will possibly be piled on top of each other. 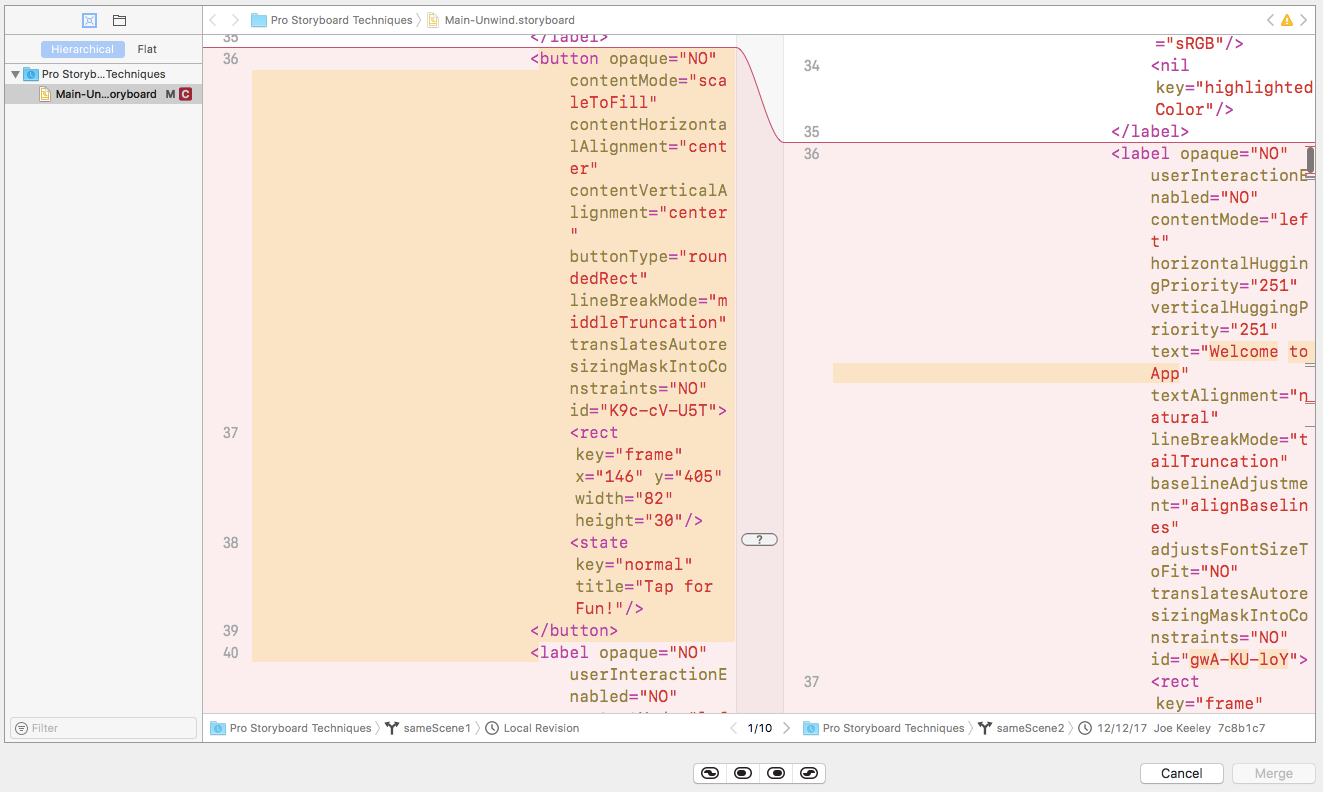 The best approach with “Editing the Same Scene” type conflicts is to avoid them in the first place. Be careful when assigning tasks to developers to segregate them across scenes; if multiple tasks affect the same scene in a storyboard, see if the tasks can either be combined or can be assigned to the same developer to coordinate the changes and avoid a conflict.

Why not just merge the conflicted changes and hope for the best? When trying this approach in the past, I have frequently gotten odd behavior in the storyboard as a result of not getting the XML updated in a way that Interface Builder can handle. This odd behavior can be anything from an object not positioning correctly to an object not responding to edits as expected in Interface Builder. Odd and unexpected behavior can also be encountered when running the app; for example, a button might not recognize a tap as expected, or layout issues might occur that don’t make sense with the existing constraints. These types of issues can be frustrating and take a long time to investigate and resolve, especially when you don’t realize they are a result of attempting to resolve the merge conflict manually. In that case you will end up tearing apart the scene and rebuilding it in order to get it to work correctly anyway.

As you get more comfortable reading the source XML for storyboards and identifying the types of merge conflicts, you may encounter cases where multiple merge conflicts of different types have happened in an attempted merge. The techniques described can be used in combination to resolve multiple conflicts in a storyboard – just be careful to accurately identify each type of conflict or bad things can happen.

Using the categories described here with some care and discipline in assigning tasks to developers, merge conflicts in storyboards can go from being catastrophic to being handled effectively. Don’t miss out on the benefits of storyboards in your project just to avoid some possible pain with merge conflicts – you can handle them!