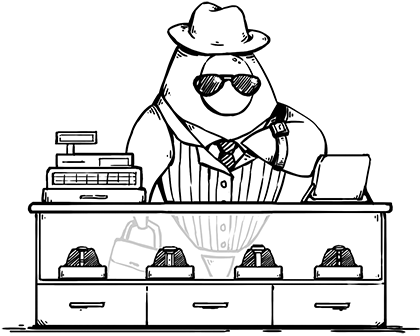 When is the last time you heard someone complain about their watch? It’s ancient technology that has been continually improved1, but the wristwatch form factor has seen little change in the past hundred years. The main purpose of a watch is to tell you the time.

Major innovations in watch technology have centered around one thing: telling time more reliably. Forty years ago the Quartz movement was introduced and now even a cheap watch can tell accurate time for months, losing only seconds 2. Automatic movements are accurate for a week or two — losing seconds a day3 — but they require no batteries or electronics, unlike their quartz counterparts.

The concept of a smart watch proposes to disrupt the slow, steady evolution of watch technology with the introduction of interactive screens, voice recognition and the ability to read email messages and weather forecasts. On paper, it sounds like Apple will usher the golden age of wrist-enabled computing, but as I dig further into the iWatch concepts I feel they miss. In fact, I have a hunch everyone is wrong about Apple’s forthcoming watch.

There’s a new kind of opportunity for Apple. A good watch can last for decades and will be passed down from generation to the next. Apple can create the first digital heirloom — a piece of technology that can be useful long after it has fallen out of fashion. I believe Apple wants to build an object that will endure time.

A watch designed and built by Apple must first be a good watch. Consider Apple’s introduction of the iPhone and the quarter of their presentation spent on its merits as a phone. Apple knew then the iPhone had to be a good phone first, otherwise there would be no reason to always have it on you. Apple’s watch will be no different. It must be good at telling time for you to want it on your wrist.

An LCD touch screen can be cracked or damaged. It requires significant amounts of energy that force the screen to be turned off. This concession allows most smart watches to maintain adequate power a few hours or perhaps a day. You can glance at most wrist watches without thinking, but a smart watch requires one to push a button. How is this less cumbersome than pulling your phone out of your trousers (or purse) to check the time? A touch screen adds little but distractions and inconveniences from telling time. Its addition presents too many obstacles for making a good watch, so I believe Apple won’t include one.

Instead of trashing fantasy smart watch concepts, let’s focus on the basic elements of a great watch.

As mentioned earlier, the accuracy of a watch is most important. To anyone born in the last forty years, the phrase “Synchronize your watches” sounds strange. A modern quartz watch, once set, will remain 99% accurate until its battery dies. Batteries tend to last years, so power and accuracy are taken for granted by most watch owners.

Watches before quartz movements were not nearly as accurate. An expensive watch with a Swiss-certified movement will lose 6 seconds a day even when used properly. Manual watches require their owner to regularly wind their watch by turning a knob on the exterior that in turn compresses an internal spring keeping the movement charged. More common today are automatic movements that contain a mechanism that converts energy from their owner’s arm motion to charge the spring.

Because there are no electronic parts — even the automatic movement uses a system of pendulums, gears and weights to keep their system going — mechanical watches can last for centuries with proper maintenance. Many of these watches become family heirlooms passed from generation to generation.

The craftsmanship and reliability of these watches more than make up for the lower accuracy, in the eyes of a collector. The holy grail of a watch design is a well-crafted automatic movement, with accuracy that exceeds a Quartz movement. Such a watch would be attractive to collectors and average watch owners alike.

Considering accuracy alone, one could easily wonder why the market for automatics did not plummet after the invention of a quartz mechanism. The reason, aside from nostalgia, can be found in the actual movement of the clock hands. Most automatics feature a near continuous rotation of the second hand allowing for sub-second measurement of time4. In contrast, a quartz movement will tick between seconds, discretely jumping from one to the next. This movement can be audibly annoying as well as visually unappealing.

The price of automatic watches can vary greatly depending on the smoothness of their movement. Movements can also include a variety of complications for everything from a secondary timer to phases of the ocean tides.

Complications can include a calendar display, a rotating ring around the watch that can account for time zone differences and assorted numerals around the clock at appointed hours. The number of complications typically correlates to the complexity of the watch face itself. Are there numbers at each of the ordinals? At a few? At none? Some watches don’t even have a second hand — offering only the hour and minute of the day. These complications can increase the value of the movement but also detract from the beauty and clarity of the timepiece.

4. Resistance to Water and Durability

A crucial — but often overlooked — feature of nearly every watch is that it is waterproof. Sport watches such as an Omega Speedmaster or a Rolex Submariner are water resistant to extreme depths — used by divers and swimmers alike. You wouldn’t want to remove your watch every time you wash your hands.

This level of water resistance requires a sealed system. That means no external charging port, no touch screens, and a watch that cannot be easily cracked open for repair. When your watch has a problem you should take it to a watch repair shop — most would not attempt to open your watch at home and replace a battery.

Great watches are waterproof, but this can prove the most technically limiting quality for a wrist watch. It affects power management and user interaction on a level not addressed by any of the Android smart watches to date or the beautiful — yet impractical — iWatch concepts floating around the internet.

The complications and clarity of the movement combine to form the core of a watch’s beauty. Watches are fashion statements for many of their owners — if a person values simplicity, it will be reflected in their choice of watch. In contrast if a person is flashy and desires to show off the expense of their watch, this will be reflected in a more complicated watch. It is simply not possible for Apple to create a single watch with broad appeal to an opinionated audience under such subjective measures.

Instead, they can focus on technical improvements to classic watch designs while reducing complications and building a beautiful movement in typical Apple fashion. Apple can build a better watch that people will want to wear instead of building a smarter watch no one wants to wear.

To do this, I imagine Apple will create two models of their watch: the everyday casual and a dress watch. The casual watch would appear in vibrant colors, reminiscent of the iPhone 5c or the iPod nanos. It would be waterproof, have a host of activity and motion sensors and finish with a simple quartz movement. In every way modern take on the casual Swatch wrist watches from 1980s.

In contrast, the dress variant would be clad in stainless steel, feature a beautiful swiss movement and recalibrate the time whenever synced with an iPhone or Mac. It would be a watch with the beauty and durability of a Rolex, with time accuracy surpassing a quartz movement. Better even, the dress variant could be powered entirely through the same pendulum that auto-winds the movement.

It sounds simple, but this high-end model could turn the watch industry on its head. If Apple can make a sports watch desired as much as a Rolex or Omega, with the accuracy of a Quartz movement they will have remade a classic. They will have created the first modern digital heirloom.

I believe they will do this by creating a sealed, waterproof watch with an analog display that never has to be charged. Both models can be synced to a Mac or iOS device through a wireless (bluetooth) connection that can be triggered by tapping the glass protecting the movement. This sync will record activity from the sensors and recalibrate the time. No buttons, no fancy input, no voice commands and no charging cables.

Many in the tech press have already figured the price for Apple’s watch around $300. For a touchscreen enabled smart watch, packed to the gills with battery, wifi radios and USB charging circuitry, there is little margin left with such a price. What does the bill of materials look like for a $100 Swatch? Even a handcrafted swiss movement can be manufactured for less than $100.

The casual model priced in the $200 range and a dress model in the $3000 range would provide margins any luxury brand would covet. Watch lovers already pay thousands for an expensive movement so higher price would not shock them. And at $200, the same enthusiasts would likely purchase the casual watch multiple times in different colors. Large margins? High design? Sounds like the core of Apple’s business to me.

The more I analyze the market for wrist watches, the more I’m convinced an Apple watch will resemble a classic design instead of radically changing the wrist watch form factor. If Apple can make the the technology invisible, they can charge a premium to the core of the high-end watch market. Apple isn’t building a watch for nerds — they’re building a watch for the rest of us.

None of this is Real

It sounds plausible, but this is all conjecture. I don’t know what Apple is planning for their watch — I only know what I want them to do. There are signs that Apple is changing. There are strong signs their design aesthetic is changing. But Apple is still about owning the profit share in their markets and building high quality products at comfortable margins. Unless that is changed, I expect the Apple watch to be less smart than expected — but much more beautiful.